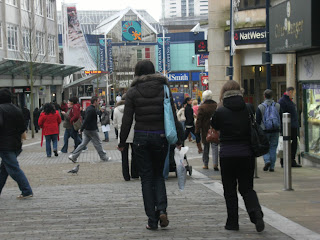 Saturday morning was sunny and bright at 6am. By 10.30 it was raining!! Council Leader Chris Holley was waiting in the car park opposite the Grand Theatre, brolly open.
We started our walkabout and I stopped a young couple to introduce us and asked what they thought of the City Centre. "The Quadrant Shopping Centre is fine but walk outside and everything looks tired and tawdry" they told us.
Moving on we entered a children's clothes shop and asked again. Immediately a woman customer told us exactly what she thought about shopping in Swansea. "Car parking should be free otherwise everyone will go to nthe out-of-town shopping centres or Trostre at Llannelli. There is a good range of shops there and parking is free and nearby."  Cllr Holley explained that there is subsidised parking at the NCP carparks for one hour and that the High Street car park offers 4 hours for £1 after 10am but this was countered by the shopper who said she'd not park down there as she thought it not too safe an area. It is a difficult situation. On one hand the local council are promoting park-and-ride to keep traffic out whilst BIDs are encouraging people to drive into town.
In the Market we spoke with a trader who explained that he thought the market had become isolated for many older people who found it difficult to walk from the market to the bus station carrying their shopping. He went on to tell us that it was only just a few years ago when the Market was just so much busier. He thought it was a combination of reasons including the fact that most people were now struggling so they didn't have the money to spend. He suggested that some buses should pass the Market and be able to set down and pick up passengers. Although there were a couple of pick up spaces by the market this was insufficient. Cllr Holley said that the Market is the jewel in the crown as far as the city is concerned and is the reason many come into Swansea.

We called at a couple more shops but as the staff were serving we moved on. We stopped off at the Ole Coffee Shop in Oxford Street and had a welcome coffee, out of the rain. Speaking to the owner, Ali,  we were told that  trading was very difficult and that council actions were not helping. Ali said that he and many others he had talked to had little faith in the council employees where one department didn't know what another was doing. A major problem for the Ole Cafe was the high business rates. Cllr Holley explained that the Council were concerned with this but that the Welsh Assembly Government were responsible and it was they who levied the rates. He realised that this was a bitter pill to swallow and that the council  had made representations to WAG.

Ali also mentioned the changes in the streets and local junctions. Oxford Street now narrows at the end so there is only one lane, thus reducing traffic flow, then turning right towards the Kingsway the lights appear out of sync so there are hold-ups.

These views support the feed-back that I've had when I've been out on my own talking to shoppers and traders. A big concern is the one-way system and the fact that traffic is usually gridlocked on Kingsway at any but the quietest times and this does deter people from visiting Swansea. The roadworks over recent months have had a real impact of visitor levels as people are help-up a few times then decide not to bother anymore, so the city has lost footfall that will be difficult to bring back or replace.

Several have thought that the Kingsway is now a health and safety hazard with half the road being one-way whilst the other (for buses and taxis) is two-way. It is confusing even for regular shoppers and must be a cause for accidents. How many have there been in the last 123 months? Before long one will be fatal. If the extra space is needed for the bendy buses then how do they manage so easily en route to the overnight parking areas?