SPECIAL OFFER UNTIL DECEMBER 31st 2015
ALL SIGNS £8 incl post in UK send order to ask@mikeleahy.com and we'll give payment details
In contradiction to common belief over 97% of people who are registered blind can recognise tactile signs from a distance but may not be able to read them. Many have blurred vision which will allow them to identify an outline and colour so that they need to know where they should be looking and at what. 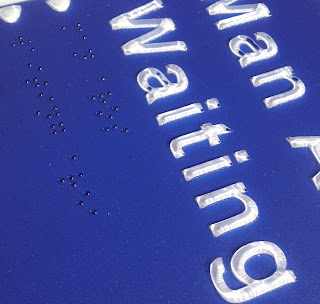 See more at   http://accessaudit.blogspot.com/p/tactile-signs.html
We have a selection of the most common tactile signs on our separate page. Take a look. We have made them as cheap as chips so there's no reason not to use them in your business. Tactile signs are one of the most visual adjustments you can make and help not only visually impaired people but everyone because they are designed to be easily identified and read.
All tactile signs comply with legislation and best practice. All, unless otherwise stated are bi-lingual in Welsh & English. All have raised text and symbol (where applicable) and bi-lingual Braille.
All signs are in blue, unless otherwise stated, and have  contrasting white text, symbols and border so that they are easy to identify.There is an indent raised white arrow head marking at the beginning of the Braille so that it can be easily identified. All signs are made of a durable long-life plastic, vacuum formed to be usef both indoors and outside. They come with a self-adhesive peel-off backing sitable for most surfaces but can be screwed for added security.
Signs should all be located at a standard height of 1750mm from floor level so as to be easily distinguished and at a suitable height for both tall people and wheelchair users.


There are many other access issues associated with sight impairment and the Access Audit Co can help and advise you on overcoming this. Call 07976 827959 for a realistic and pragmatic approach.

Marketing is dead Finding and selling to customers is in

The word is out "Marketing" is dead! Well not marketing exactly, just the word itself. 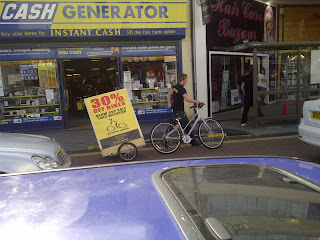 I think that we have got tired of "marketing" and especially self elected marketing specialists.
Finding and selling to customers is one leg of the business holy trillogy - and that's marketing.

Ask 85% of small businesses if they want some marketing help and they'll say  "No! I do all my own!" When you ask them what they do, they finally tell you then it's often "I stay open later now", "I had an advert in the xxxx local magazine last month" or "I've got some special offers, and the leaftel's on the counter" . If you don't broadcast that you are open longer nobody will know. If you advertise just once the results will be slim - you need to be regular. If your leaflet is on the conter it won't get new customers into the shop. I don't think these are marketing.

Big business have the resources and cash to employ a marketing team and pay for adverts, buy space and carry out huge leaflet drops. Small business are looking for way to bring customers into their retail units and shops for as little as possible but few are using innovative ideas.
I did see this small a-trailer being towed by a bike on Sunday and the same business set up big posters around town. There was also a stilt walker dressed as a baker but little else.
Possibly small business owners don't know who to listen to or what to do right now. They keep reading about these marketing guys but often don;'t want to spend money on what may not work or what they can do themselves anyway.
And everyone is talking about social media. The problem seems to be few business owners actually understand it. And there are people out there charging large amounts but usually not achieving measurable results. There are some good people out there. It's just finding them. If you want someone who is really hot with social media for small businesses just e-mail me at ask@mikeleahy.com. I've found a real gem.
Meanwhile here are some ideas that will get either new customers or existing customers buying from you. Ideas that aren't new, that you know about but which you haven't tried.
Pick one a week and try it out:
1. Hand out leaflets with a special offer. Do it from your shop doorway is allowed.
2. Get existing customers to sign up to your newsletter
3. Make sure your website has your phone number at the top of each page and answer the phone within 2 rings every time
4. Give amazing service. Today I have seen some really excellent customer service that I;ll desribe on another occassion
5. Get a loyalty card system in and advertise it in your window etc
6, Ask customers what you can do to improve their shopping experience with you
7. Set up some joint ventures with non competing adjacent shops (both of you get an offer on a leaflet and hand out each others to customers as they pay for their purchase)
8. Check your window display looks good and is current and there is something to entice people over the threshold.
9. Check your staff are trained and are attentive to customers. Smiling is a great way to start a good shopping experience for customers
10. Try for additional sales. Today I watched a girl sell a handbag for £180 then went on to get a matching purse and credit card holder worth an extra £87


Bonus: Hold an open evening where customers are invited in to try some products, hold a fashion show, see a demonstration. Get invites and encourage them to bring a friend. When the friends become customers send out a thank you card to whoever brought them along.
It's not knowing but doing. So take action now.  Good luck
Posted by Mike Leahy at Wednesday, April 13, 2011 No comments:

How business appears to have changed

Today I went on a pre-arranged appointment at 11 o'clock. On arrival I was told that the partners were too busy to see me. A client has just dropped in and they'd been able to fit her in! I'd have to come back. Could I leave some information. "Yes I have your number so I'll arrange a new time on Friday!!"
Now I think I'm well mannered and not forceful in any way. The appointment was made by phone and I was asked when could I call to discuss the proposition. So I was really there by request.
Is the old courtesy of calling up to change an appointment gone?
Last week I visited a local business to give a presentation. It went well and the director asked for a quote so he could talk it through with his co-director (no! I don't know when I'll see him). After several unsuccessful calls back I was told he was in "just a minute, I'll see if he's free" shortly the guy came back with "He's not interested!" Now I can understand that if I'd cold canvassed an unknown company but no. This was someone I was on more than nodding terms with. Shouldn't he have spoken to me, no matter how briefly, and told me himself. At least I'd have found out why. And probably felt a bit better.
Is the old courtesy of telling bad news personally gone? I understand that texting is now used to fire or make staff redundant. Is this the new way?
A couple of weeks ago I had the last of 3 appointments with another business person. The first appointment was denied when I called? The second was a waiting game. I waited 38 minutes why he attended to a custommer who came in just behind me. Meanwhile 3 sales assistants stood by and waited for customers!! On the 3rd appointment I drove to town, parked up and went into the retailer. He wasn't there. "He's gone to Cardiff" I got an assistant to call him on hios mobile. "Something cropped up and I had to come to Cardiff". That's a 40 minute journey so wouldn't a phone call have been in order?
I write this because it seems that attitudes have changed. E-mail and texting are altering the way we do business. I guess I've been brought up to beleive in relationship selling, that it takes more than a quick glance over a website before spending money on something that may not actually be right. I believe that we buy from people and that our first impressions (right or not) generally are important: but it takes more than a first glance to build up a relationship.
Is selling thought of as old hat? The amazing thing about all three scenarios above is that each was with the top man in a retail business. What do they think when someone doesn't arrive for an appointment with them? Do they charge a "no show"? I spoke with a letting agent just last month and he had 12 out of 19 appoinments fail on one weekend.
I've had about 40 years selling experience and run quite large sales-forces. I've trained sales-people for major companies and have been national sales and national trade sales managers. I have created businesses and been successf. My customers over the years have includeda whole range from small one-man enterprises to the BBC, Marks & Spencer, BHS, BP and Shell, 27 local authorities, major hotel chains police authorities and many more. So I have had some experience. It;'s not as if I've blustered in and  forced myself or tried high pressure selling. hese experiences have been a surprise.
Now despite all of this I have found that most appointments work. That there is still plenty of good manners and business form around. And despite the recession which is biting hard right now for many  there is business out there. I am pleased with the business I've written up in just the last month.
I'm off to Cardiff and Bristol during the coming month and will be telling you about my sales experiences there. I feel there will be a change as the pond gets bigger.
Your comments are really appreciated. I'd love to hear from you.
Since writing this late morning I have had two really good appointments, both culminating in sales for services, not products, with a high value so I feel that I'm doing something right. And to make matters even better I've had a phone call and two texts supporting and agreeing with my experiences. Small ponds big problems.
Posted by Mike Leahy at Tuesday, April 12, 2011 No comments: