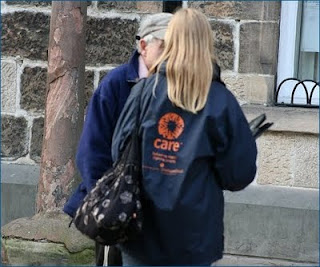 I mentioned that charity collectors are allowed to work the city centre free of charge. I totally agree that charities should be allowed to collect without being charged a fee by Swansea Council but the charity collectors, after referred to as chuggers, are paid and they can be intimidating. There have been nummerous articles about them right across the UK.
It is understood that they might earn a basic pay of around £7 per hour but can be on bonuses giving them considerably more. If they are agency employees then the agency apparently earns a percentage of the direct debit that the giver signs on the street with the charity collector.
It will be interesting to see what it costs some of these charities to have collectors on the streets. In Scotland it is understood that Shelter pay out some £3m to chuggers and gather in £11m. That is a pretty high cost and just consider how many donations they may be losing where people find themselves offended by being accosted. I'm not saying that this might be the case in Swansea but it does leave a question mark.
I see that the Evening Post posted my article last Thursday about the comparative cost of distributing leaflets in the city centre compared to other cities such as Cardiff and Newport. The council spokesman said that a fee waas charged to cover costs of controlling this activity.
Here is my response in a letter I have sent to the Evening Post. I hope they publish it.
"I do agree that it is necessary to have some control over the distribution of leaflets but why should there be such a high cost? I mentioned in my interview that both Cardiff and Newport do not charge local businesses and encourage them to advertise freely.
It is worth noting that both cities do control leaflet distribution and have guide-lines and application forms to complete. Neither charge as they told me that they consider this a valuable service to local businesses: one that they feel they should support.
Swansea council seem to seek ways to stealth tax local businesses wherever possible, and this hasn’t just applied during the recent cuts in their budgets. The charge for leaflet distribution goes back several years. I note that the Swansea spokesman claimed that charges start from £36 but this was not mentioned when I contacted the City Centre management team asking about charges. They only mentioned that charities can canvass free of charge (although I understand the canvassers are paid a commission) and certain bodies who claim freedom of speech such as political parties. It is also interesting to note that the Big Issue sellers do not pay. I was told that there is a maximum of 4 but it does sometimes feel that there is one on every street corner! I have nothing against Big Issue sellers and in fact after being around 40 years getting people on the first rung of the jobs ladder, they do a good job, but with a small city centre footprint more than two sees overkill.

Come on Swansea Council. Don’t be penny pinching skin-flints. I understand that you aren’t here to make money for local businesses but to ensure the infra-structure is there for businesses to succeed or fail dependent on their products, plans and management. How do you feel you are succeeding? Have you put in place that infra-structure?
A little bit of help would be most welcome by local independent businesses, particularly during these difficult trading times. You know that the high rents and business rates are crippling so here is your chance to help in a small way."
What do you think?
Posted by Mike Leahy at Sunday, November 13, 2011