We have a mascot for the Swans and LC but I don't think there's one for Swansea City.

The term mascot – defined as a term for any person, animal, or object thought to bring luck – colloquially (informally) includes anything used to represent a group with a common public identity, such as a school, professional sports team, society, military unit, or brand name. Mascots are also used as fictional, representative spokespeople for consumer products, such as the rabbit used in advertising and marketing for the General Mills brand of breakfast cereal, Trix. See the LC mascot to the right 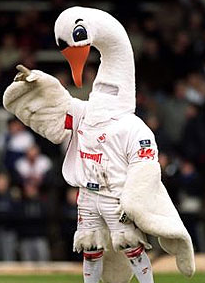 And we have the Swan's mascot here on the left. In the world of sports, mascots are also used for merchandising. Team mascots are often confused with team  nicknames. While the two can be interchangeable, they are not always the same. For example, the athletic teams of the University of Alabama are nicknamed the Crimson Tide, while their mascot is an elephant named Big Al. Team mascots may take the form of a logo, person, live animal, inanimate object, or a costumed character, and often appear at team matches and other related events, sports mascots are often used as marketing tools for their teams to children. Since the mid-20th century, costumed characters have provided teams with an opportunity to choose a fantasy creature as their mascot, as is the case with the Philadelphia Phillies' mascot, the Phillie Phanatic.

Costumed mascots are commonplace, and are regularly used as goodwill ambassadors in the community for their team, company, or organization. Apologies for this being so americanised!! Bt you get the drift.
Posted by Mike Leahy at Friday, September 30, 2011