Friday was the private viewing of Bus Stop Cinema, a collection of 12 short films chosen by the organisers as a representation from the submitted entries. 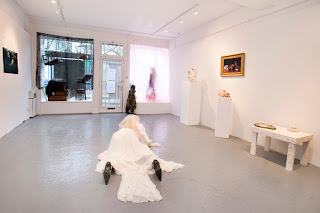 I personally find some works of art and arty films difficult to understand. maybe I'm a pleb!! But I was pleasantly surprised to find a wide range of film that was, in the main, interesting and understandable. I was late by a few minutes so was unable to read the programme. And there wasn't a lights-up period between films to catch up. So that meant that I couldn't read the synopsys of each. Do you judge films on entertainment or information value? presentation? or do you look at the artist's notes to gain a perspective.  guess it's a bit of all these.
In the end I found some films stood up on entertainment value whilst others I had to wait until the end of the Show to gain an insight. And maybe I'm impatient so I found some too long. The gallery was converted into a small blacked-out cinema for the event and a nice touch was the popcorn we were given. And supplied in cups went there wasn't that appalling rustle that you normally get. I missed the drinks before the show but there was an opportunity to take a glass afterwards and discuss the productions.

I particularly liked Foto by Thomas Canning. Strong story and although it began with a stereotype character that was particularly necessary and actually enhanced the film for me. It was fast paced and full of twists and turns that had me wondering throughout. Interestingly this is Cannings debut as writer and director and he certainly pulled it off for me. In fact he has shown at several festivals and was awarded best thriller at the Limelight Film and Arts Awards in 2009.

Jayne Wilson's All that Might Heart did tell a particular story that tied the film together when I read the synopsys at the end but I just enjoyed the images and music which gained pace, peaked and slowed down to the end leaving me feeling that this was a piece to relax through, and that I'd be happy to play in the background, just as I play music that I enjoy.

David Marchants's Love Boat was lively with plenty of action and although I didn't necessarily pick up on the writers inner thoughts and motivation I did feel that the story flowed well.

And my final selection is Downfall: Self Service Tills and Jaffa Cakes which had me suddenly sitting up and enjoying this humour that mocked the 20th century's most iconic monster: making him look ridiculous. The message came across within a few seconds and was well written so that the humour stayed tight and continuos.

I think you'll find that my selection probably tells you I'm a real pleb and do like films that are pacey and with a strong storyline. Go and take a look. Is my selection sound? Would you choose a completely different group?

It is brilliant to have the Elysium Gallery in town where artists of different disciplines can display and share their work. But of course without you popping in to see what is on then there is no point. Artists like us all like feed-back.  Well done guys.
The Elysium Gallery is open until Saturday 3rd September on Wednesday through til Friday afternoons 12 - 5pm. You can pop in a get a taste or sit through the show which consists of 12 short films with a total performance of an hour and a half.

Comments are welcome.
Posted by Mike Leahy at Sunday, August 21, 2011